These books were featured on our Book Chat Day on Nov. 1, 2016 with Lisa Voss and Scott Clark of the Lincoln City Libraries and Problems & Solutions producer Lizz Bauer.

The Swans of Fifth Avenue
by Melanie Benjamin [Benjamin]

Of all the glamorous stars of New York high society, none blazes brighter than Babe Paley. Her flawless face regularly graces the pages of Vogue, and she is celebrated and adored for her ineffable style and exquisite taste, especially among her friends–the alluring socialite Swans Slim Keith, C. Z. Guest, Gloria Guinness, and Pamela Churchill. By all appearances, Babe has it all: money, beauty, glamour, jewels, influential friends, a prestigious husband, and gorgeous homes. But beneath this elegantly composed exterior dwells a passionate woman–a woman desperately longing for true love and connection.

Enter Truman Capote. This diminutive golden-haired genius with a larger-than-life personality explodes onto the scene, setting Babe and her circle of Swans aflutter. Through Babe, Truman gains an unlikely entrée into the enviable lives of Manhattan’s elite, along with unparalleled access to the scandal and gossip of Babe’s powerful circle. Sure of the loyalty of the man she calls “True Heart,” Babe never imagines the destruction Truman will leave in his wake. But once a storyteller, always a storyteller–even when the stories aren’t his to tell.

Truman’s fame is at its peak when such notable celebrities as Frank and Mia Sinatra, Lauren Bacall, and Rose Kennedy converge on his glittering Black and White Ball. But all too soon, he’ll ignite a literary scandal whose repercussions echo through the years. The Swans of Fifth Avenue will seduce and startle readers as it opens the door onto one of America’s most sumptuous eras.

Young Frankenstein: The Story of the Making of the Film [link to article about book on Mel Brooks’ website]
by Mel Brooks [ On Order? ]

Mel Brooks’ own words telling all about the players, the filming, and studio antics during the production of this great comedy classic. The book is alive and teeming with hundreds of photos, original interviews, and hilarious commentary.

Young Frankenstein was made with deep respect for the craft and history of cinema-and for the power of a good schwanzstucker joke. This picture-driven book, written by one of the greatest comedy geniuses of all time, takes readers inside the classic film’s marvelous creation story via never-before-seen black and white and color photography from the set and contemporary interviews with the cast and crew, most notably, legendary writer-director Mel Brooks.

With access to more than 225 behind-the-scenes photos and production stills, and with captions written by Brooks, this book will also rely on interviews with gifted director of photography Gerald Hirschfeld, Academy Award-winning actress Cloris Leachman and veteran producer Michael Gruskoff.

A lush, thrilling debut–a publishing event already the subject of an article in The New York Times–about a year in the life of a uniquely beguiling young woman, set in the wild, alluring world of a famous downtown New York restaurant. “Let’s say I was born when I came over the George Washington Bridge…” This is how we meet unforgettable Tess, the 22-year-old at the heart of this stunning debut. Shot like a bullet from a mundane past, she’s come to New York to escape the provincial, to take on her destiny. After she stumbles into a coveted job at a renowned Union Square restaurant, we spend the year with her as she learns the chaotic, punishing, privileged life of a “backwaiter,” on and off duty. Her appetites are awakened, for food, wine, knowledge and experience; and she’s pulled into the thrall of two other servers–a handsome bartender she falls hard for, and an older woman whose connection to both young lovers is murky, sensual, and overpowering. These two will prove to be Tess’s hardest lesson of all. Sweetbitter is a story about discovery, enchantment, and the power of what remains after disillusionment.

The Dollhouse
by Fiona Davis [Davis]

“The Dollhouse. That’s what we boys like to call it. The Barbizon Hotel for Women, packed to the rafters with pretty little dolls. Just like you.” Fiona Davis’s stunning debut novel pulls readers into the lush world of New York City’s glamorous Barbizon Hotel for Women, where a generation of aspiring models, secretaries, and editors lived side-by-side while attempting to claw their way to fairy-tale success in the 1950s, and where a present-day journalist becomes consumed with uncovering a dark secret buried deep within the Barbizon’s glitzy past. When she arrives at the famed Barbizon Hotel in 1952, secretarial school enrollment in hand, Darby McLaughlin is everything her modeling agency hall mates aren’t: plain, self-conscious, homesick, and utterly convinced she doesn’t belong–a notion the models do nothing to disabuse. Yet when Darby befriends Esme, a Barbizon maid, she’s introduced to an entirely new side of New York City: seedy downtown jazz clubs where the music is as addictive as the heroin that’s used there, the startling sounds of bebop, and even the possibility of romance. Over half a century later, the Barbizon’s gone condo and most of its long-ago guests are forgotten. But rumors of Darby’s involvement in a deadly skirmish with a hotel maid back in 1952 haunt the halls of the building as surely as the melancholy music that floats from the elderly woman’s rent-controlled apartment. It’s a combination too intoxicating for journalist Rose Lewin, Darby’s upstairs neighbor, to resist–not to mention the perfect distraction from her own imploding personal life. Yet as Rose’s obsession deepens, the ethics of her investigation become increasingly murky, and neither woman will remain unchanged when the shocking truth is finally revealed.

Suddenly thrust into the role of primary caretaker for her family following the tragic death of her husband, Ellie Robbins is appointed to serve out his term as sheriff of their rural Tennessee mountain town. The year is 1936, and her role is largely symbolic, except for the one task that only a sheriff can do: execute a convicted prisoner. Ellie has long proven she can handle herself. But becoming sheriff is altogether different, and the demands of the role are even more challenging when she is forced to combat society’s expectations for a woman. Soon enough, dark secrets come to light, and Ellie must grapple with small town superstitions and the tenuaous ties she shared with a condemned killer as she carves out a place for herself in an uncertain future. 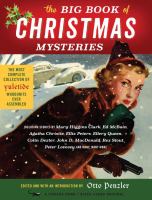 Have yourself a crooked little Christmas with The Big Book of Christmas Mysteries .

Edgar Award-winning editor Otto Penzler collects sixty of his all-time favorite holiday crime stories–many of which are difficult or nearly impossible to find anywhere else. From classic Victorian tales by Arthur Conan Doyle, Robert Louis Stevenson, and Thomas Hardy, to contemporary stories by Sara Paretsky and Ed McBain, this collection touches on all aspects of the holiday season, and all types of mysteries. They are suspenseful, funny, frightening, and poignant.

Included are puzzles by Mary Higgins Clark, Isaac Asimov, and Ngaio Marsh; uncanny tales in the tradition of A Christmas Carol by Peter Lovesey and Max Allan Collins; O. Henry-like stories by Stanley Ellin and Joseph Shearing, stories by pulp icons John D. MacDonald and Damon Runyon; comic gems from Donald E. Westlake and John Mortimer; and many, many more. Almost any kind of mystery you’re in the mood for–suspense, pure detection, humor, cozy, private eye, or police procedural–can be found in these pages.